In 1953, Giovanni Battista Giorgini – already world famous as an “inventor” of the great Italian Fashion Shows in Palazzo Pitti in Florence in 1951 – discovered, during one of his trips to Veneto, an old semi-abandoned ceramics factory in Este. Giorgini, with his profound culture and aesthetic sensitivity, recognized hundreds of old dyes that were virtually buried in storehouses that showed signs of noble artisan traditions. Without Giorgini’s discovery, the history of Italian ceramics would have been deprived of one of its fundamental chapters and a great heritage of art and civilization would have been lost to mankind. Those molds, forms of refined elegance and decorations of rare beauty, represented the precious heritage of the great master ceramist of eighteenth century. Georolamo Franchini worked with an equally famous French modeler, Jean Pierre Varion, who was the first to introduce the porcelain formula into Italy. In the 1780’s, these two men opened one of busiest works in Este. Even at the time, Este was considered one of the most important production centers in Veneto as well as Italy.
Due to the fact that Count Giorgini overcame many difficulties prior in his life, he managed to bring Franchini’s old works back to life, creating “Este Ceramiche Porcellane”. This company is currently led by G.B. Fadigati, Giorgini’s nephew and worthy heir. Este Ceramiche Porcellane is well known and today represents the genuine ceramics tradition in Este. 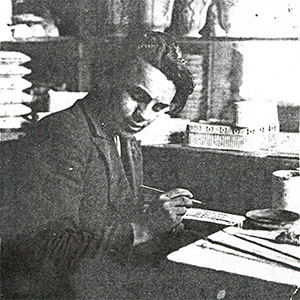 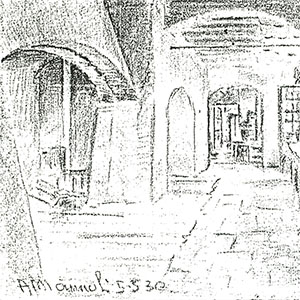 inside the factory, an illustration from the 1930s 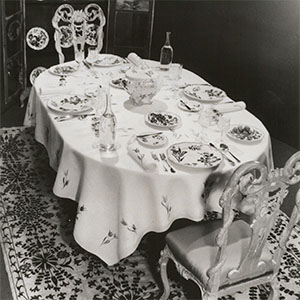 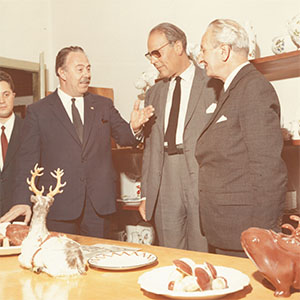 However, the continuity of tradition does not mean solely reproducing past shapes and styles. That is why “Este Ceramiche Porcellane”, with all due respect to its noble origins, has implemented and exemplified a top line production of great historic and cultural value. Este Ceramiche Porcellane has created successful and fruitful collaborations with some of the greatest contemporary stylist to bestow on its new collections the “fashion content” that exemplifies the best possible interpretation of the most competent, recherché contemporary market. In this way, high quality household goods and ornaments have come to be such a modern trompe l’oeil, inspired by old eighteenth century models. Patchworks decorated with original floral patters in the classic blue color of Este are formed by interchangeable pieces. These pieces can be used in various ways according to choice, and the refined gold and platinum borders applied to a classic octagonal and bamboo shape.
In other worlds, “ceramics art” has come into being. It has allowed this marvelous product, whose history began with the dawn of mankind, to play a leading role in modern times, which is so often dominated by technology and impersonal mass production.
Reborn, thanks to the effort of G.B. Giorgini, “Este Ceramiche Porcellane” nowadays plays “a role of creative attraction as if it was gathering together market stimulus, though the suggestion of an artist, designer, or its own intuition, and making them a reality by means of excellent technique.”